← Lament
Tweetups of the future → 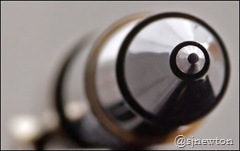 Your #SUNDAYPIX theme for tomorrow, 9th November, is one that you chose yourselves, via that poll down there. Go on, scroll down – yes, that one. We’ve done this one before, but that was back in 2011, so it will bear another outing now. “An object from a strange angle” it is, which I have snappily titled

Photograph an everyday object from an unusual angle, post your pics to Twitter on Sunday (including the hashtag #sundaypixWTF in your tweet) and see how many people manage to guess what you’ve photographed. As ever, photographs must be yours (or your family’s or your secret lover’s) – nowt just nicked off the internet. Yes, you can post an old pic you’ve previously taken, or even one from your family history. Follow the hashtag (click on it in any tweet or add a column to your app) on Sunday to see what others have made of the theme. You are encouraged, nay ordered, to comment on other Sundaypickers’ tweets and guess the mystery objects.

← Lament
Tweetups of the future →