Why’d I have to go and make things so complicated? 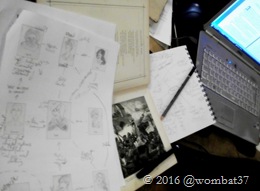 So, I get back from the gym and I’m ready to start writing. The problem is that I can’t think of a sub-plot to delay my protagonist by a day underground while parallel plotlines 11B (Moss) and 11C (raven/reeve) reach plotpoint GAMMA. Were I less of a stickler for continuity I could just write the strands and sod whether they match temporally, but no. I’m a stickler for stuff like that, me. I stickle.

Or, you know, why can’t I ever just write a novel-length story that just goes in a straight line? Warren Peace had two parallel plots, chuntering on together in alternate chapters. In Fog I kind of folded Finn’s tale of mystery, weirdness and showers back on itself and plaited the strands (that was fun!). In The Raven’s Wing there are, let me see, at least four things going on at once in different places, all important to the tale.

Herein, though, lies the beauty of Scrivener. First of all it makes stickling easy by allowing me to look at parallel timelines by judicious use of keywords. In addition, I can actually leave John festering underground not caring what he’s doing while I write future chapters, secure in the knowledge I can come back to him at that moment later when a light bulb hits me about what he might actually be doing there.

Looks like I’m writing after all. Well played, Scriv.